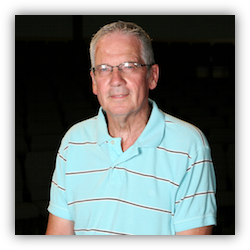 Pastor Chuck was raised in a strong Roman Catholic family in Milwaukee, WI. After one year of college, Chuck enlisted in the Air Force and was stationed in Bellevue, Nebraska. It was there that his commanding officer, Doug Comstock, explained the gospel to him for the first time. On June 29, 1970, Chuck accepted Jesus Christ as his Savior in Doug’s backyard. After finishing his Air Force tour of duty, Chuck pursued a Bible college education. Following three years of work in the secular workforce, Pastor DeCleene continued his education at Capital Bible Seminary in Lanham, Maryland receiving a Master of Divinity degree. He has served as the pastor of Faith Baptist Church in Carroll, Iowa and was a missionary in Equador from 1993-1998 until he was forced to return home due to family health issues. After teaching for one year at Tennessee Temple in Chattanooga, TN., Chuck joined the faculty at Faith Baptist Bible College in Ankeny, IA. Chuck was called as the Pastor of Evangelism at Saylorville Church in August of 2007.

Chuck and his wife Dianne have four children and seven grandchildren.